You might not believe it now if you saw me, but back in the day I was a relatively mediocre basketball player. 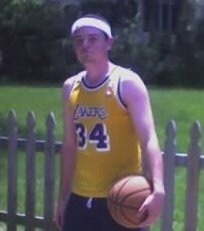 Here’s me from my pre-iPhone days, ten years and 70 pounds ago. Just look at that Lakers throwback! More like Zac-quille O’Neal, amirite?

As the great Jim Jones (the Diplomats guy, not the Kool-Aid Jim Jones!) once said:

When I was a student at Franciscan University of Steubenville, I spent more time shooting hoops than I did studying.

I could’ve played for the school basketball team, but instead I CHOSE to play in the intramural leagues.

You know, kind of like when an alcoholic CHOOSES to drink.

One of my favorite things to do between classes was to hit up the gym and hustle other clueless bros on the court. It would be more impressive if I had been playing at Rucker Park in New York, rather than at a school where the student body was at least 95% white, but I had to take what I could get.

And I’d never play for money, because that would’ve rubbed a lot of the other students the wrong way (kind of like some priests).

Anyway, if I saw another guy shooting baskets, and nobody else was around, I would go to the opposite basket and intentionally miss shots.

Eventually, the other guy would walk over as I pretended to make a fool out of myself.

I’d look around and reply with a simple “Who, me?”

That’s when I would go from Billy Hoyle to Sidney Deane in a basket or two.

“Man it’s hard work, HARD GOSH DARN WORK, being this good!” I’d crow after sinking a mid-range jumper (I was at a Catholic school, so “G-D” wasn’t an option).

Whoever I was playing would get pretty defensive after losing to me (not defensive during our game, or else he would have won).

“Man, I’m coming off a knee injury!” one dude said.

“Man, I haven’t played in months!” another dude said.

Of course, I’d respond with, “I can’t believe it, I never shoot that well.”

One of my favorite movies of all time? White Men Can’t Jump 😊

It taught me how to hustle.