I’ve always been a dog person in a family of dog people.

My family did have a couple of cats many years ago, but the first one ran away and the second one peed in the floor vents throughout the house…and then ran away.

So, no offense to cat lovers everywhere, but dogs > cats, if for no other reason than I’ve never known a dog to pee in floor vents.

Which leads me to Becca, the O.D. (Original Dog).

Becca was the first dog I ever knew. A Shetland Sheepdog (or “Shelty” for short, but I always hesitate to write that because I can never remember how it’s spelled) that my parents bought a few years before they had me. 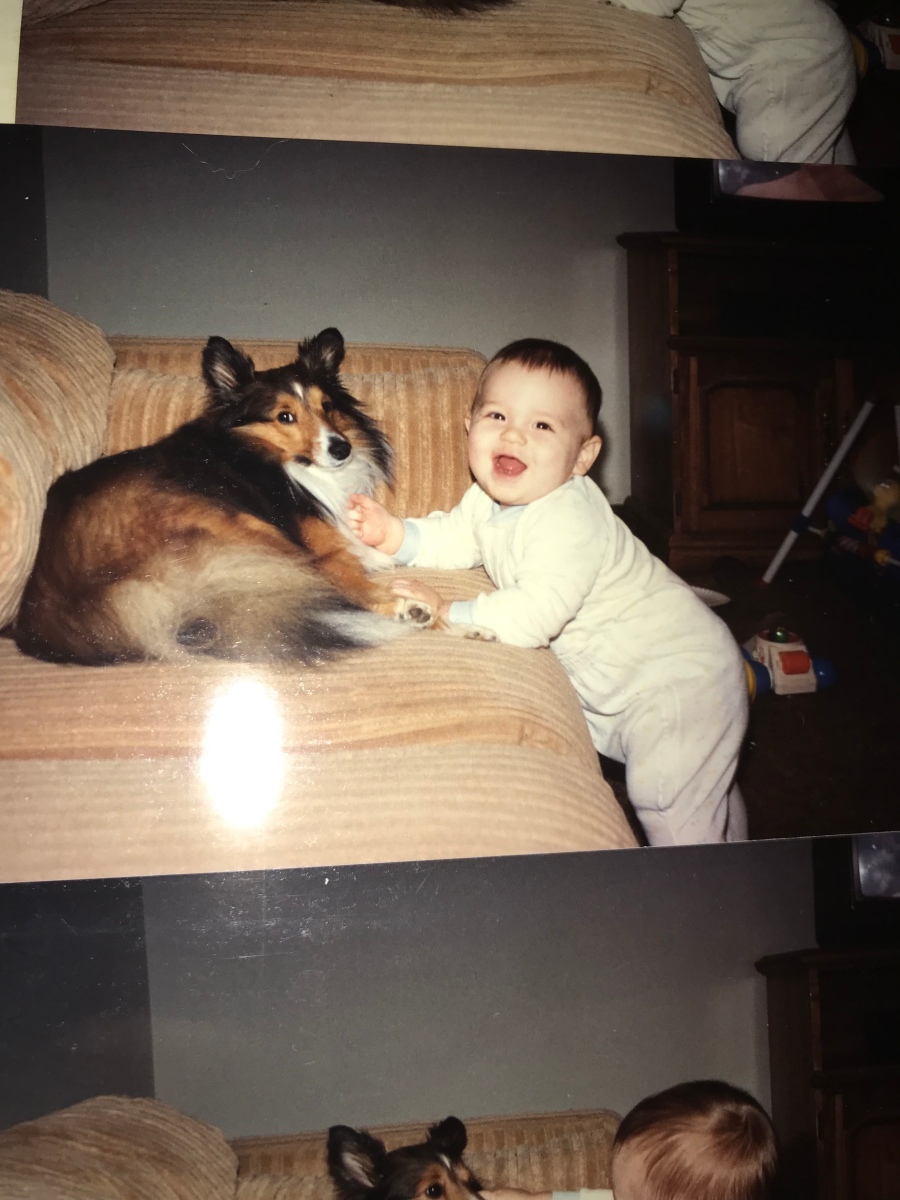 As you can tell from the picture, Becca was a VERY PATIENT DOG (I mean seriously, how patient would you be if you had some baby sticking his hands around your mouth all the time?).

As a kid, I always thought Becca was weird because she was the only Shelty I had seen up until I reached the 2nd grade. When I learned my assistant teacher owned a Shelty, I was ecstatic. That meant Becca wasn’t the only Shelty in the world 😂

She was also the only one (human or animal) that I knew with the name “Becca”, so I thought that was an odd name.

It didn’t occur to me until I was older that “Becca” was short for “Rebecca.” Derp derp, score one for Team Zach 😒

Oh, she was a fun, yappy little thing. Pops and I used to play fetch with her in the snow (well, when it snowed. NC gets snow occasionally) and she would zip-slip after the ball like a seal on ice.

We always took her camping with us, and she was good about not running away.

The first time I remember seeing Pops cry was when Becca died. I was eight. Eight solid years of zero crying from Pops, until we lost her.

We left her with a family friend one time while we went on vacation, and she ended up choking on a pork bone. We rushed her to the vet, but she passed away during the surgery.

The first and only dog I ever had up to that point was gone.

God, I still miss her. It’s been 22 years and I still think of that dog from time to time.

My wife and I have two dogs of our own now (Miles the Jacked Russell and Crackers the Rat Terrier mix), but someday if I’m lucky, maybe we’ll find a Shelty who needs a home (we prefer rescue dogs, but there aren’t too many rescue Sheltys out there. Plus, Miles and Crackers in a 1,000-square foot apartment is rowdy enough).

So on this Thanksgiving Day, here’s to you, Becca. 🥂 Thanks for being an integral part of my childhood, and thanks for inspiring in me a love for dogs.

Have a nice holiday, y’all!