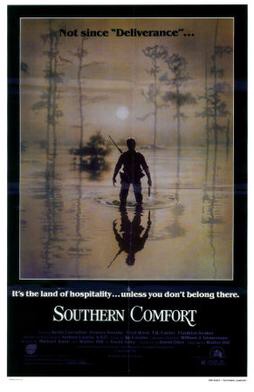 Yesterday I was surfing Amazon Prime and came across a little movie called Southern Comfort (not to be confused with the documentary about Robert Eads…or the liqueur).

I had been looking for this movie for YEARS, because I’m a big Walter Hill fan (he directs this one), but the only time I ever saw a DVD copy of it was in a used bookstore…for 30 bucks!

Granted, I’ve spent more on DVDs in the past (*cough cough* Criterion Collection), but I don’t have that kind of disposable income anymore.

Anyway, I didn’t think Boo-Thang would be interested in this sort of flick, so I had to wait until she was either asleep or at work (one of the great things about our marriage is that we don’t subject each other to movies that don’t hold our interest).

Miles, my Jacked Russell, woke me up at 4 this morning, so BINGO, opportunity found!

Anyway, Southern Comfort follows a group of National Guardsmen who are on patrol in the bayous of Louisiana. They commandeer a few canoes (which don’t belong to them) in order to rendezvous with some, um, ladies of the night.

During the trip along the water, however, one of the men decides to harass some of the local Cajuns by firing his blank-filled M-60 machine gun at them.

The weekend warriors spend the rest of the moving being hunted down by said Cajuns (don’t fire blanks at someone who is armed with a gun that shoots BULLETS).

You could view Southern Comfort as one of those Vietnam allegories, and you wouldn’t be wrong to. But I just looked at it as another Hill-does-some-slo-mo-with-blood-splatter action movies, because that’s just more fun.

Basically, it’s Deliverance on the Bayou (it’s even referenced in the movie’s poster), but instead of toothless hillbillies with a taste for sodomy, however, we have Ragin’ Cajuns (sorry to all you Louisiana-Lafayette alumni, but I couldn’t resist) with some nasty booby traps and a pack of imposing Rottweilers in tow.

One by one, the Cajuns pick off the National Guardsmen, who, without a map or a compass (the movie was released in 1981 folks, so no iPhones or GPS) are really out of their element in the Louisiana swamps.

Sure, it’s not Raiders of the Lost Ark, but it makes for an enjoyable viewing experience, though, especially when it’s 4 a.m. and you can’t go back to sleep.

Seeing Peter Coyote’s head get popped like a watermelon is a plus, too 🍉.

But it’s DEFINITELY not a movie I would recommend to Boo-Thang.

2 thoughts on “Southern Comfort: Deliverance on the Bayou”