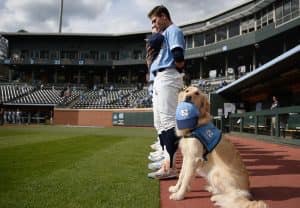 Sally Waller, from Montgomery, Alabama, was in town to support the Auburn Tigers when she noticed Remington, UNC’s Golden Retriever bat dog, wearing a Tar Heels uniform in the dugout during pre-game warmups.

“I saw that poor dog in a Heels jersey,” Waller told reporters, “and that constitutes as abuse, in my opinion.”

“I would know, too, because I used to volunteer for the ASPCA, or the WWE, or whatever the PC Police call it now.”

According to security, Waller ran down the stands with a jar of peanut butter and started calling to Remington, jumping into the dugout in the process.

“She yelled out ‘Don’t worry, pooch, I’ll save you!'” security coordinator Ron Lawson said. “She was waving a jar of Peter Pan towards that poor dog, and the players didn’t know what to do.”

Lawson went down to the dugout and escorted Waller out of the stadium.

“I asked her what in the heck she was doing at a baseball game with a jar of peanut butter in the first place,” Lawson explained.

“I’m just glad that dummy got kicked out,” Fox said. “She was all worried about Remington, while we were the ones getting abused.”

Auburn defeated North Carolina by a football score of 14-7 after a 13-0 start, and will continue its season in the College World Series in Omaha.

Howlers Musings and a Shadow's Lies

Things I Thought, True or Not

simplyemsblog
Mommin' in the Real World

Every Day is a New Adventure

Your most important show!

If left in solitude, man would drive the world into an emotionless destiny. But, we at GOE will never let humans become devoid of Humanity. Because: "The World needs co-operation, not competition..." - Vedant Dasgupta

Be careful, I might convince you.. You are art.✨

Jordan and Eddie (The Movie Guys)